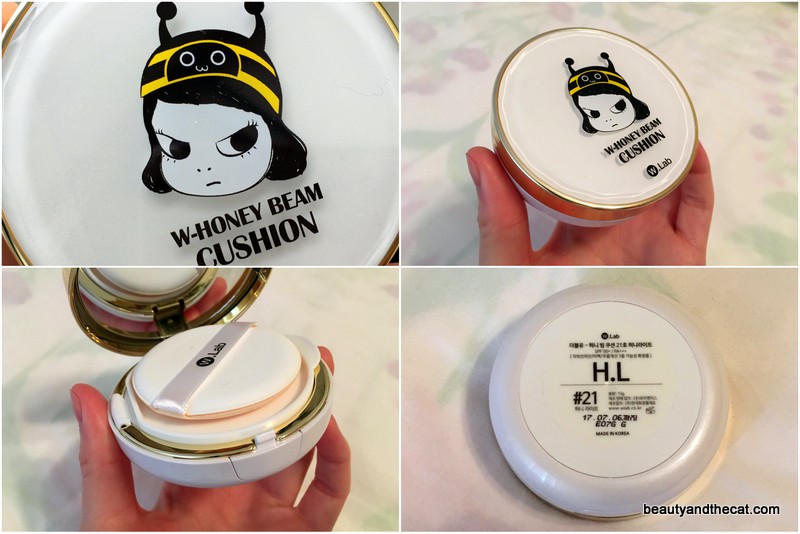 This cushion caught my eye with its sassy bee-girl whose side-eye rivals only Renee’s when she’s seen bad contouring.  Very Yoshitomo Nara.  (<–I’m not that cultured; Renee pointed it out.) 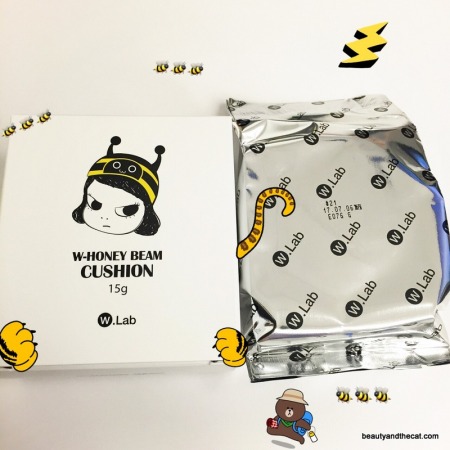 This W-Honey Beam Cushion by W.Lab (provided by Q-depot for review) promises “celebrity’s honey skin.”  Yeah, I started salivating on the spot, too.  The cushion boasts SPF 50+ PA+++, honey, and honey extract.

It’s currently $29.55 at Q-depot (and 10% off with current coupon PREXMAS10), which is a little pricey given that it doesn’t come with a refill (refills are available but not on Q-depot).  It’s also my first Korean cushion that’s not from one of the many brands under AmorePacific’s umbrella.

The main differences from my AmorePacific cushions (AmorePacific, Hanyul, Hera, Laneige, Innisfree, IOPE) are: (1) the puff feels a little more clammy and absorbent than a Rubycell puff and (2) the makeup isn’t evenly distributed, with some pooled on the surface and dry cushion elsewhere.

After using this for over a month, the cushion’s still not fully soaked.  Those differences didn’t affect performance much, although a Rubycell puff would have helped apply this in thinner layers.

Note: The W.Lab case does not fit refills from AmorePacific, Hanyul, Hera, Laneige, Innisfree, and IOPE, and those cases don’t fit the W.Lab refill.  The width of the refill hinge is just too different.

However, as soon as I applied it, I could tell that it was too pale.  It’s a moist vanilla cream (not inhuman beige like it appears on the puff), but it’s 1 or 2 shades lighter than NC15/other No. 21s.  I should have guessed from the demo photos in the product listing, which show No. 21 as, well, somewhat ghostly.  But if you’ve had trouble finding a pale enough cushion, then this might be a match.

The paleness actually makes it great for two things:

Review & Demo of W-Honey Beam Cushion in No. 21

Coverage is light and buildable to medium before it starts to look heavy.  You can see that it can’t cover monster zits or acne marks completely and in fact makes them look a little grayish.

The finish is quite moist and dewy.  In fact, the first time I used it, it smudged right off while I was resting my hand on my cheek to apply eyeliner!  But it doesn’t come off easily so long as you give it a few minutes to settle in.

The difference between my face and neck make the shade mismatch apparent.  But check out the glow!  It’s not that visible in the winter shade, but it’s quite apparent under bright light and especially on my nose and cheeks (the high points of the face).

Also notice how it fills in and smooths over my nose pores.  That’s abnormal for me, but I guess I was having a good nose day!  (All cushions tend to apply patchy on my nose and sink into the pores, so I usually use mineral makeup or Hourglass Dim Light there instead.)  If you normally have no issues with that area, then this cushion should work.

Just to prove that I don’t look too crazy, here’s how it looks after the rest of my makeup.  No other base makeup or powder so you can see the true coverage and finish.

That said, other photos that I took at the same time reeeeeallly made me look like a floating face on someone else’s body.  If you’re my shade, I recommend trying No. 23 Honey Beige instead (disclaimer: I haven’t tried it personally).

To preserve that K-drama glow, I used my DIY cushion blush (still good after 10 months!) instead of powder blush.  I also attempted a gradient lip with one of my HGs (Laneige Water Drop Tint in Hot Pink), but ehh, was too lazy to blend it properly.

Normally, I powder around my nose and hairline to prevent the shine from being confused for oil/sweat and to also make everything last longer.

Now for my main complaint.  Despite the promise of moisture and the superficial appearance of moist skin, it absolutely requires well prepped skin (i.e., moisturized, flake free, and smooth) like any other cushion and it doesn’t survive a full day in a dry, heated office without breaking up a little.  By the end of the work day, I can see my spots and skin texture showing through.

So this fares worse than the AmorePacific Anti-Aging Cushion that I’ve been using on other days and which balances my dry skin better (review to come but in short, looooove).  I’ve limited the W.Lab to weekend use, when I don’t need it to last as long or withstand office air.

The most obvious point of comparison in my stash is the Innisfree Water Glow Cushion (link to my review), which also ran light, gave a moist glow and light-medium coverage, doesn’t come with a refill, and came up short on lasting power.  The Innisfree is a little cheaper than the W.Lab on Q-depot but of course lacks the spiffy packaging.  Between the two, the W.Lab gives a more reliable glow–and actually a glowier glow.

Pros: K-drama-worthy glow, one of the dewiest, shiniest, and creamiest I’ve come across in a foundation.

Cons: Runs a shade or two lighter than other brands, so go a shade up.  Refill not included.  Not as moisture-preserving as it looks. Shorter longevity compared to many other cushions.

P.S. If you register for a free account on Q-depot (there’s an award points program), Q-depot will email a coupon code for $5 off your first order of $69 or above.

VIOLET TENDENCIES: Love IG for PURPLE-trating the trend of joyful and photogenic skincare. Brands have gratuitously purplefied everything! . @idewcare cleansing balm 💜 @glowrecipe low-pH foaming cleanser 💜 @tatcha Gentle Rice Polish 💜 @farsalicare Unicorn Essence 💜 @olehenriksen Retin-ALT line 💜 @tatcha Dewy Skin Cream. . And thanks for tagging us in stories and posts about even more purple things because YES I want to be enabled. 🤗 What other purple fings should I try? The one complication is that I loooove lavender as a color but NOT as a scent. 👈 First world problem. . #beautyandthecat #tatcha #idewcare #unicorn #glowrecipe #olehenriksen #bakuchiol #farsali #purple #lavender #purpleskincare #scffinder #rasianbeauty
Angela and I decked our hauls with some intensive and restrained shopping. Only bought necessities even though stuff were on massive discounts. I’m talking Rafra orange balm (usually $36) for $5!!! Even with the deals we both did more damage than we liked. I blame it on the mean tuxedo party cats that seduced me with their sullen eyes at Maido Cannot wait to try the “No Chemical” sunscreen UV gel. I cannot read a word but ingredients on the internetz seemed...ok. That was enough scientific research for moi to experiment. Me second exciting new buy is the berry spensive History of Whoo massage pack. This brand only makes a couple of masks that don’t require rinsing til morning time. This is one of them. History of Whoo has been my holy grail so I’m looking forward to reuniting with a friend I can no longer afford in excess 😭
🔞CAUTION: Rated SPF 50 *and* NC-17. 🧴I bust out into a hearty cackle when I noticed the back of my sunscreen. How had I used Nivea Zero Feeling for months without seeing this gem?! 🙈 (Moar like 💯 feeling, amirite? 🤗) . Here’s a mini-review of the sunscreen, which is SPF 50+ PA++++: I like but don’t feel compelled to repurchase. It’s a good value (big bottle for ~$16 on @kirei_station), dispenses as a thin runny milk (JERK—I mean SHAKE—first), liiiightly moisturizes, and dries down to a moist, no-white-cast finish (it doesn’t mattify). I actually think that for many people, this is worth a try, especially if (like me) gels/watery gels feel a tad drying. (For reference, my skin runs from balanced to dry.) . I was initially worried that “zero feeling” might mean oil-sopping, but this actually reminds me of a lighter weight Skin Aqua UV Super Moisture Milk. While it’s not truly “zero feeling,” it *is* extremely lightweight and thin and doesn’t pill or flake when I apply powder foundation on top. Methinks it’s just a bit boring and I gravitate towards formulas that are more moisturizing, like watery essences. But overall, two 🍆🍆 up! . #rasianbeauty #skincareaddiction #jbeauty #nivea #kbeauty #kireistation #scffinder #japaneseskincare #beautyandthecat
A mix of Sephurrrra picks + (relatively) new releases for your considerashun if you’re debating how to spend the winter BI/VIB/Rouge coupon (2019HOORAY, expires 12/17/19). . Fings I have and love: 💜 #tatcha Dewy Skin Cream because purple and winter 💜 #itcosmetics Pink Outside the Box blush to instantly brighten 💜 #hudabeauty Nude Obsessions in Light that gives me everything I need (neutrals + lavender) 💜 #patrickta She’s Seductive blush but not blush. . Fings I’m curious about: 💙 #Dior Lip Glow Oil because the OG lip balm remains HG 💙 #glowrecipe banana cream because I have a softness for Runts-scented skincare (like the TonyMoly sleeping pack) 💙 #skinfix Dark Spot Corrector with AHAs and brightening ingredients 💙 #milkmakeup Vegan Milk Moisturizer. . #sephora #sephorasale #sephorarouge #beautyandthecat #kbeauty